Abby had some special days.

We've been back in this area almost a month now.    Daughter Terri had her surgery and is doing well as can be expected.    She did have a return trip to the hospital just a few days following her release.  As she is allergic to so many medications they had a tough time regulating her pain.   When she was re-admitted she stayed another few days until she felt better.    Each day she is stronger but still has a way to go before she can go back to work or even be allowed to drive.   That does not stop her from working at home via phone and computer.

Her 4th birthday was June 10  (our 20th wedding anniversary).   The following Saturday it was birthday party time.

The theme was Tea Party.    Lovely hats and shaws for all.   Although not all worn in this picture. 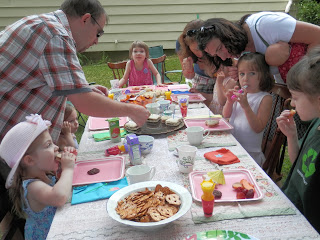 The girls and guests had a fun time in the play house Leonard made for Abby and Charlotte. 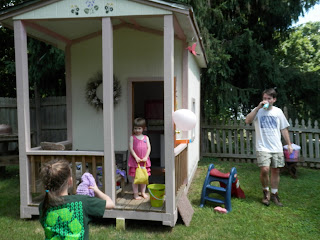 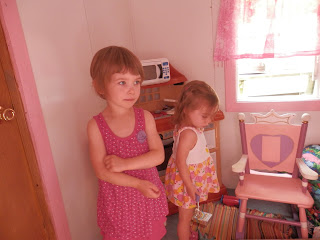 Smacking at the Pinata is always fun., and sometimes a bit dangerous. 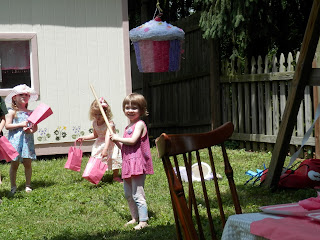 Even more fun (and dangerous) is scrambling for the candy. 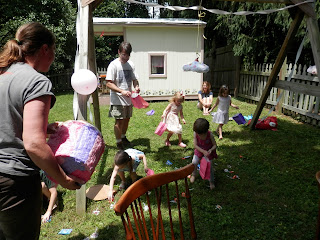 All finished up with the traditional cake.   Abby by the cake with sister Charlotte looking on. 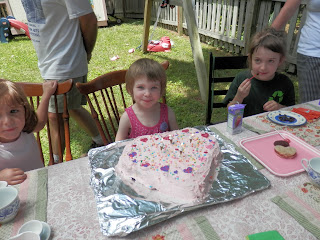 Abby's next special day was the end of school year program at her daycare.  There she is in the middle, singing her heart out.    Jesus Loves the Little Children and Do Lord! 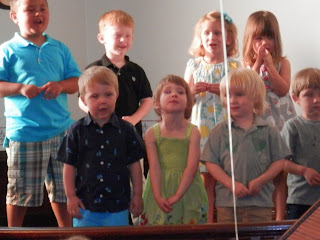 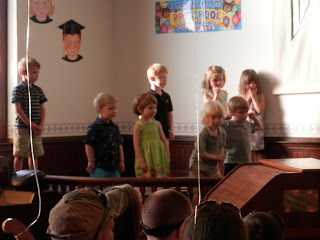 Getting her Year End certificate for moving up to the next level. 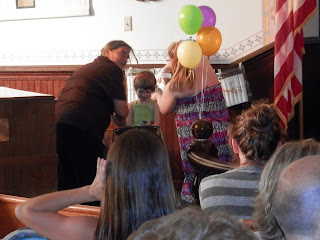 So, June is about to disappear.  Let's see what July has in store.
Posted by Phyllis at 2:32 PM

Abby is having a great month:)

I so miss having 'littles' around :) our youngest is 12! Of course we have the 'grands' but we never get to see them :( You are very lucky.

How is Len's leg? Everything going along OK health wise?

Such cute pictures of Abby and friends. Can just imagine her singing - haven't heard "Do Lord" in a good long while!! We used to sing that with the kids and Russ would play it on his guitar.

Looks like the kids all have a wonderful time.
Hope daughter is doing better.

Hope Terri continues to improve and no more set backs.

How special Abby must have felt to have two huge events. She is such a cutie.

Pretty nice to be able to share in her special day! Glad to hear that Terri is doing better.

Glad to see Abby had a great birthday party. The play house is perfect for a group of little girls.

Glad to hear Teri is progressing its always tough when our kids are sick no matter what their age.
still marvel at the playhouse Len built