Little House on the Prairie

Today we drove about 90 miles each way to: 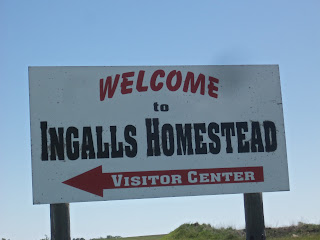 Of course I've heard of Laura Ingalls Wilder although I've never read her books nor watched the TV show staring Michal Landon based on her life on the prairie.    Laura was born in 1867 and died in 1957. She wrote her first book at age 65!

She lived on this site during parts of her childhood.   "Pa" Ingalls took part in the Homestead Act.

The Homestead Act was signed in 1863 or thereabouts (I forget).  People were provided with a quarter section which is 160 acres.  In South Dakota they had to farm at least 10 acres for five years and build a home on it.  Provided this was done, they then had to file papers which cost approximately $17.00 and the land was theirs.

In the distance you can see the West Bethany Church which was built in 1905 and was located 10 miles from the Ingalls Homestead and moved in the 1990's to the complex. 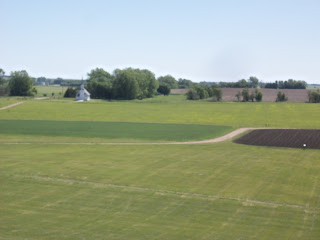 Today the site holds a visitor center, newly constructed buildings and structures that were moved to the site.   There are no original buildings still there.   However, five cottonwood trees remain of the thousands that Pa planted on his homestead claim.

One building that was moved to the site in the Flindt's Garage.  It was built in 1901 in the town of DeSmet. 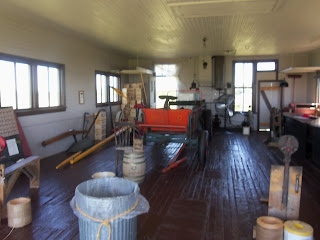 Since it took a while to build a suitable house, people on the prairie would live in either a Sod Hut that would be partially buried in the ground.  This huts lasted 5 to 7 years.  After a heavy rain, the sod would drip for days. 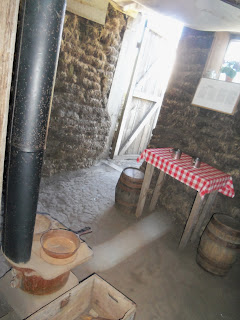 Or they would build a shanty with tar paper siding.  The inside walls would be "papered" in newspapers. 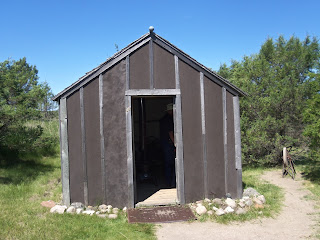 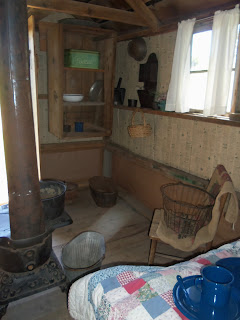 There is a replica of the Ingalls home but OOPS! we got so engrossed with talking to a guide that I forgot to take a picture. 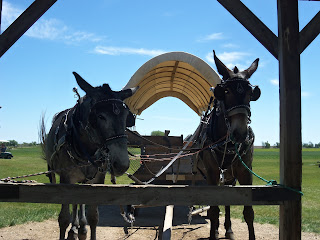 to the Little Prairie school, Johnson School No 20. 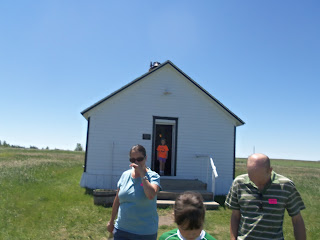 where we got some "learnin" in readin, riting, and rithmatic. 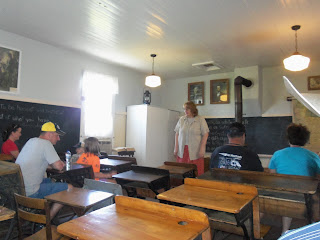 At age 15 Laura was a teacher in a similar school. 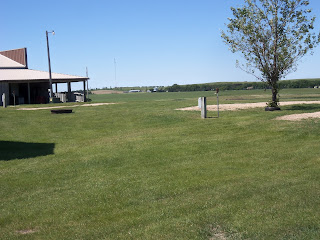 one of my favorite shows of all time...funny how you and karen and Al have the same blog title this evening :)....I betcha you felt like you were stepping back in time..would love to go there...

Great tour. Boy do we have it easy today compared to living in a shanty with tar paper siding. Thank the Good Lord!

Great tour and yes we have it made now days.

Thanks for a great tour and history lesson. Sure looks like a small house to live in.

I haven't read the books, but have watched all of the TV shows. Don't remember SD being mentioned. Thought it was Minnesota. I'm confused. :(

Looks like an interesting place.
Sure is some flat country.

I read all of the books when I was young. Never cared for the TV show, it didn't match the images I had in my head from the books.

We have been here. In fact. when we were there in 2004, there were 7 RV hook ups there and we spent the night.... Oh my the wind was sooo strong rocked us to sleep!! Loved our visit there.

I remember reading all the Little House books when I was young... checking stacks of them out of the library for Christmas vacation. Looking forward to seeing you guys in a couple of weeks.