First a big HOWDY to Cruzin2Some and Mary Ann and William who have stopped by to read our blog.  Thanks and welcome.

What have we been up to the last two days?

We packed a picnic lunch and headed to Big Ridge State Park in Anderson County about 20 miles or so from the campground. 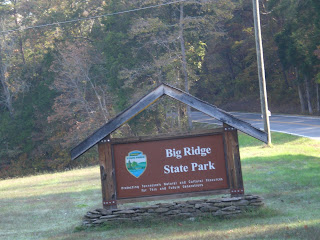 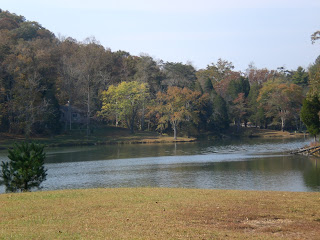 This park is also part of the TVA system.  It is an "okay" park, but not as nice as the Norris Dam Park we visited last week.   Upon arriving at the park we did our usual drive through.  There was a playground, camp sites, a lake, pavilions, picnic areas and even rustic cabins, REALLY RUSTIC. 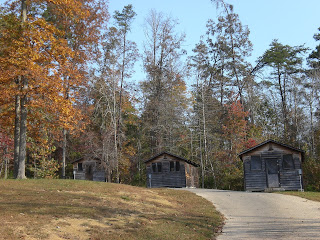 After our drive through we parked the truck and started out for our hike of the day.  We have found it is impossible to go on any walk around these parts without having at least a 5% grade at some point, usually a lot steeper. 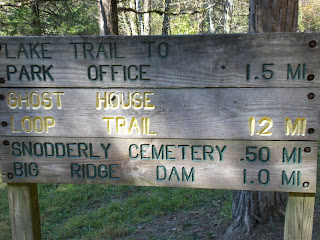 We selected the Ghost House Loop Trail.   It was a relatively easy hike.   On the way we passed this old cemetery. 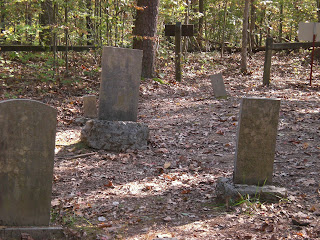 Following all this expended energy, we were hungry so drove down to the picnic area for a quiet lunch stop. 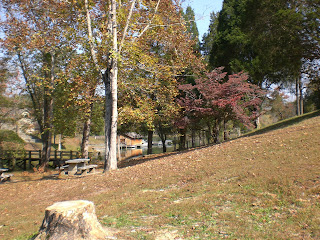 We were back to the campground in time for our 4:00 social hour followed by Tacos for dinner and another walk up in the hills behind the campground.

We drove about 17 miles over to Oak Ridge, TN.

Oak Ridge was not even a town in 1942 when it was created as a major site of the "Manhattan Project" a massive wartime effort which produced the world's first atomic weapons.  The town grew from 3,000 to over 75,000 in just a year and a half, making it the fifth largest city in Tennessee.   Quick housing was needed.  One solution were tidy little prefab houses with a living room, small bath with shower, kitchen with pantry and two bedrooms.   Total cost of the 576 sq. ft house = about $3,000 and this included all the furniture. 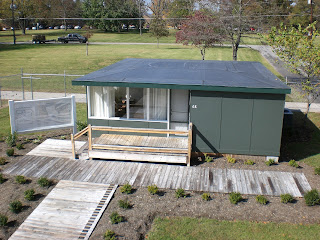 Our first stop was at the American Museum of Science and Energy. 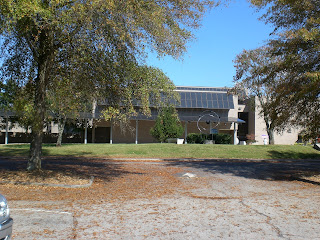 In front of the museum is a statute made from scrap metal from the Twin Towers. 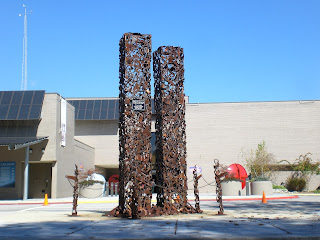 The museum tells the Oak Ridge story along with displays relating to all forms of energy - solar, oil, natural gas, coal, atomic, nuclear.  There are lots and lots of interactive displays and areas especially for children.  A large area is devoted to how the Manhattan Project ended World War 2 following the dropping of the bombs on Japan.

Some of the displays related to WW2: 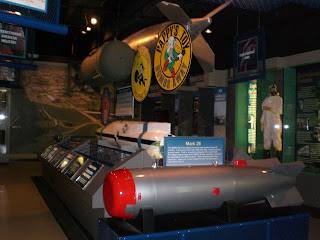 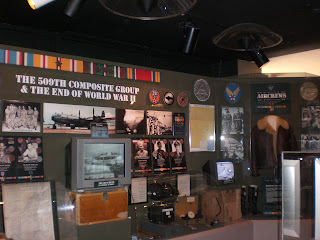 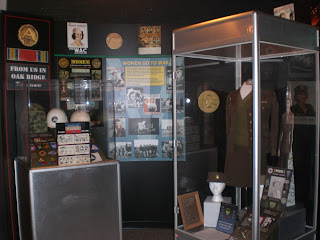 After spending about two hours at the AMSE (and only scratching the surface) it was lunch time.  We had packed our lunch minus the sandwich.   We had decided a Subway sounded good.  Luckily there was one right around the corner from the museum.

We found a picnic area next to a lake right outside of town. 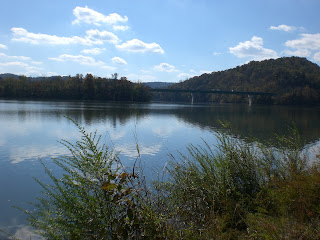 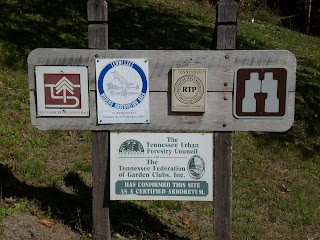 We picked out a relatively short trail for today.   One can only imagine how beautiful this place is during the Spring. 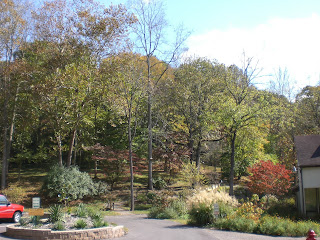 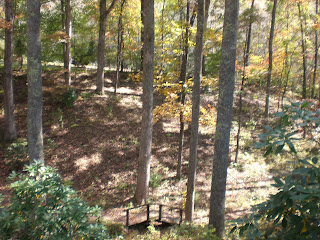 Again, we arrived back at the campground in time for social hour.   I was delighted to find that Nick and Terry Russell had checked in.  Nick is the editor of Gypsy Journal.   I have visited their web site several times over the last few years.   Often I have thought about attending one of their Gypsy Gathering rallies.  We probably will at some point.  To check them out go to http://www.gypsyjournal.net/

This life is really good.  So much to see, so much to do.  And we are just gettin started.
Posted by Phyllis at 6:42 PM

How wonderful it is for you to see so much of the country and learn so much about it.

You sure managed to pack a lot into just 2 days - tired me out just reading it.

The Oak Ridge site looks to be extremely interesting - I'd love to visit there someday.

Great pics today of everything!

haha! So you've met the irascible Nick and Terry. I've been reading his Blog and journal for 6 months or more.

Phyllis thanks for your comments. I really appreciate you looking in and seeing how things are with me.

How I long to come back to USA. Your photos have made me travel sick .... no that doesn't sound right. They fueled my 'hitch-itch' We stayed at Franklin, just outside Nashville and drove down to Chatanooga to a concert with a favourite gospel singers, Legacy Five, who are also based in Franklin. I'd love to spend more time in Tennessee and neighbouring States.

We stayed at Magnolia House a B&B opposite the library in Franklin. The owners are pastors of a little church. I believe we were directed there because usually we were modest budget motels so this place was our only experience of delightful Southern Hospitality.

I know you don't need to stay anywhere but your RV but I recommend http://www.bbonline.com/tn/magnolia/ Jimmy and Robbie are a wonderful couple to anyone who wants a bed near Nashville.

So glad to read about your travels now as we sit at home. Continue to have a wonderful time.