Monday was tour day.  We decided on a tour of Lake Junaluska which is a Methodist Conference and Retreat Center about an hour and fifteen minute drive from the Rally site.  Lake Junaluska center is about 97 years old.  It, along with the Hinton Center, are owned by the Southeast Jurisdiction of the United Methodist Church.

There are multiple homes on the compound, some privately owned and lived in, others are rental properties. There is also a hotel, cottages, golf course, meeting facility for up to 2,000 people and, of course, the lake. 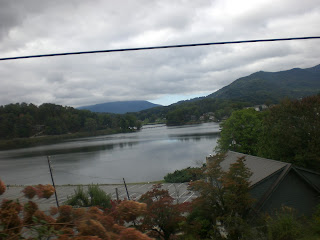 As you walk inside the welcome center, on the wall are these decommissioned pipes from pipe organs.  They are wrapped with bits of fabric that came from the shawls worn by Methodist ministers.
There were rose bushes and flower gardens are over the place.  Can anyone tell me the name of this flower?
It grows on a vine and was climbing stone walls. 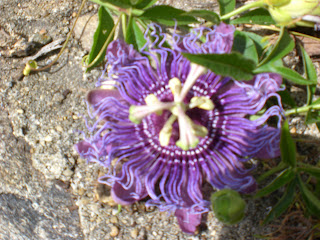 ﻿﻿
This facility hosts an extensive museum related to the United Methodist Church.  There were books once owned by John Wesley, the founder of Methodism, original manuscripts of songs written by his brother Charles.   You can hardly open a hymnal without finding songs Charles wrote. 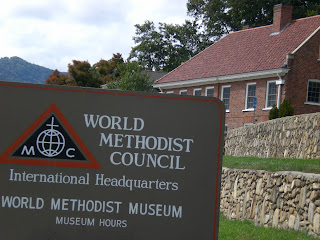 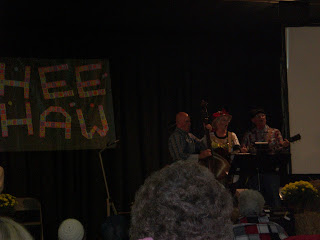 Tuesday morning was spent in singalongs and meetings.   Then came time for the silent auction and later a live auction.   Bids flew as a major part of the funding for NOMADS is through its members.

One couple issued a challenge for members to donate $20 a year for each year they were married.   Quite a few took the challenge including one couple who are married 52 years!
The money that is raised goes into a fund to assist agencies that can not afford materials, etc for projects we work on.  NOMADS pay their own way and work for free but agencies must provide RV sites and supplies.  Sometimes they have a difficult time doing so.  Last year NOMADS awarded over $75,000 to those agencies that had a need but not enough funding.
Posted by Phyllis at 12:03 PM

Looks like a lot of good deeds going on at that Rally in addition to the tours and fun get togethers!

Great job on the blog. You did a great job covering the events with the pictures too. Thanks for following!

I think the flower is a passion flower but my purple passion fruit have a white flower.

Thats all interesting since I work at a Methodist church.

We are going to check into NOMADS when we get on the road.

What a great rally you all are having there! Beautiful pics, Phyllis. We have seen that exact flower here in Pismo Beach, CA lately. I have no clue what it is either.

That is definitely a Passion Flower. We had them in Tampa. They also come in red.