We had a great day on Monday touring.   On Tuesday we decided to take it easy and just head out to do some grocery shopping.  We had noticed on Sunday that the truck was emiting white smoke when we first took off.  It did not happen on Monday so did not think much more about it.  But - on Tuesday there it was again and then we smelled a familiar odor.  It was the same odor we smelled last Thanksgiving Sunday while traveling back to NJ from Alabama and we broke down in Virginia.

Fortunately we were only one mile from the Ford dealer.  Yup - looks like the same old problem.   In September 2009 the engine oil cooler split.   The dealer in NJ replaced it.  Then two months later over last Thanksgiving the new one split.   This time Ford replaced the entire engine, radiator, hoses, heater core.   We thought that would be the end of it!  Nope - here we are one year later and faced with same issue.

Being Thanksgiving week the Ford dealer, who rents cars, had none available.   We called Enterprise, same story.   So the dealer provided us with a loaner.   An 97 Ford Fairlane.  She ain't pretty but the price is right and she runs.   We will know by Monday when we might get our truck back.

In the meantime, we have things to see and places to go.    Granddaughter Madison stayed with us Tuesday night.  Yesterday we toured.    Nearby Blount County has three covered bridges.   First we found the site of Swann Bridge.  However, after seeing a sign for it and driving a dirt road we found ourselves at a blockade with no bridge in sight.  There was another sign - Bridge Out, no trespassing.   This bridge is (was?) the longest in Alabama at 324 feet.   We never got to see it.

We then drove about 15 miles to Easley Bridge.   This bridge is 95 feet long and sits 18 feet above a creek.  The bridge was blocked from walking on it.  There was a posting at the entrance of the bridge that the bridges of the county are all in disrepair.   It states the county committee has control of funds for renovations but will not release the money.   It is sad to see the condition of these old relics. 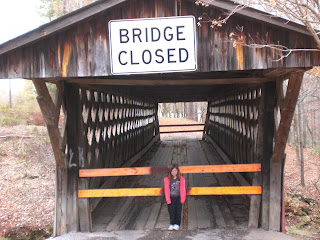 Only a few miles away was the Horton Mill Bridge.   This bridge is 220 long and is the highest covered bridge over a waterway in the nation.  This bridge is also in disrepair and you can not walk on it.  It does have a picnic area and walking trails around it. 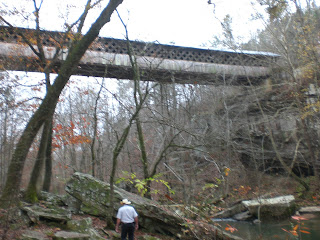 We then decided we were hungry and stopped for lunch at Captain D's, a fast food seafood place in these parts.   Disappointed, we were.

The town of Cullman is home of St. Bernard Abbey, Prep School, Monastery and the Ave Maria Grotto.   A Monk Brother Joseph Zoelti was born in Bavaria in 1878.  He came to the Abbey in 1892.  Due to an accident, he became hunchback.  That did not stop him from working on miniatures throughout the grounds over many years.    He built the first one in 1934 and the last one in 1958.  He died in 1961.   He used various materials in his work, a lot of it donated.    Broken glass, old jewelry, cold cream jars, seashells, small statutes - whatever people would send him.

Here are a few samples of his work: 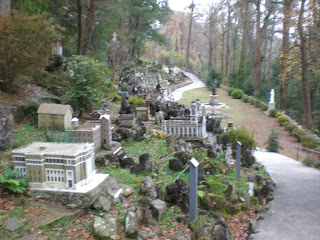 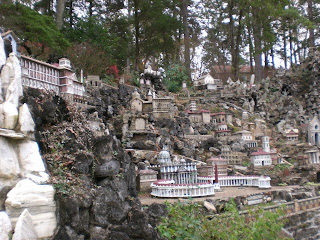 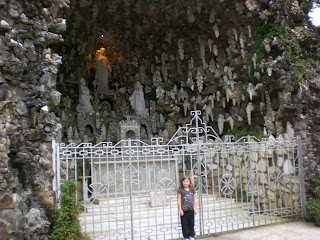 We had a delightful day with Maddie.   Later in the week we will seek out other interesting places to see.

It's sure sad to see those great old covered bridges falling into such a state of disrepair. I hope they get fixed up before they end up falling down.

Hi Phyllis,
Thanks for reading my blog and your comments. I have been reading your blog....love the pictures!
Melanie
Sunset, LA