Checking out the area

We have spent some time visiting with Leonard's son Lennie and family.   This is the house they are now renting but plan on buying. 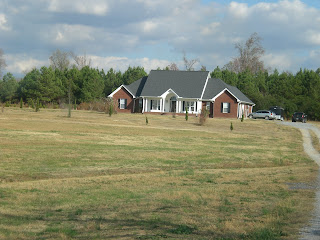 Most of the leaves are off the trees except for these beautiful maples.  The campground is loaded with them. 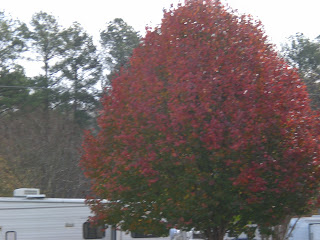 On Sunday we, as is our usual practice, found the local Methodist church and attended services.  This church and its second sanctuary, classrooms, offices and community hall take up an entire town block in Cullman.  That large building in the background is part of the complex. 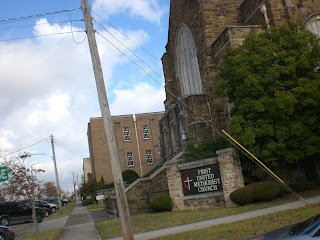 On Monday we did a bit of touring.   Our first stop was at the old Houston Jail in Houston, AL.  It was built in 1868 is the 2nd oldest log jail in the nation. 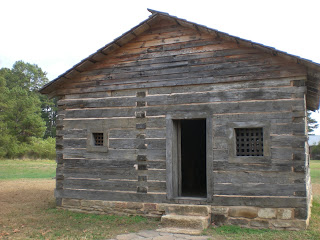 The hand-hewn logs were filled with nails to prevent prisoners from sawing their way to freedom.  There are two small rooms in the jail.  After it was no longer a jail and until the 1960's it was used as a private residence.  Note the hole in the back wall.   While a jail, this was the "bathroom facility"   EEWWWW!!! 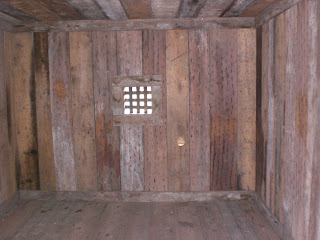 Next we drove to the town of Natural Bridge to see the longest natural span east of the Mississippi.   The sandstone arch spans 148 feet long and 60 feet high.  It was formed by an underwater river over 200 million years ago. 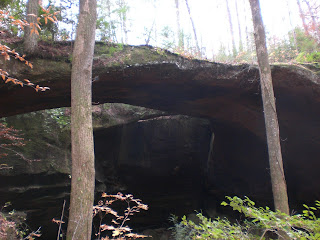 A little west of Cullman is 270 foot long Clarkson Covered Bridge.  There is a lovely picnic grove at the bridge site. 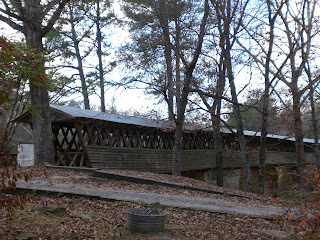 We love going to places with history and looking around.

That is a large church,I work at a large Methodist church here in KC.

What a pretty bridge. Sounds like a lovely place to picnic.

I appreciate that you drop by my blog. Thanks for you comments.

Sadly it's looking less and less likely that we will have another trip to USA but I haven't given up hoping. Meantime I love reading your Blog and if it ever eventuates we will be making an effort to meet up with as many people as possible.

Great pictures today Phyllis - that old log jail is really something. Quite the long covered bridge too. Good stuff!