We bought our rig one year ago tomorrow. We figured it was time she got a complete bath. So, here is Leonard doing the deed. 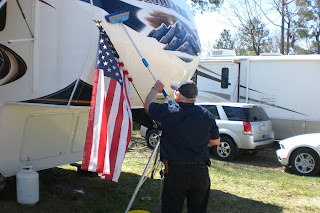 As we had planned to fulltime starting Oct 1, 2009 I applied for Medicare Part B on September 2. Right after I sent the forms, we were told that Len had skin cancer and we should cancel our plans. (Thank goodness no cancer but we had decided to not leave until after the first of the year.) On September 9 I called Social Security to tell them I did not want the Part B until further notice. I was told that when I got the Medicare card to return it with a note explaining what happened.

I received the card early in November and did as I was told. In the meantime, Medicare took two payments from my Social Security check - one for October and one for November. Come December another payment was deducted. I then went to the local Social Security office in NJ and they had me fill out a form stating I did not want coverage until further notice. Right after that I received a refund via direct deposit of approximately $84. This was strange as the monthly cost is around $96.00. What happened to the other $12? I expected I would be later refunded the two more months of premiums.

In mid January I sent a new form to Medicare requesting coverage starting March 1. I received my March payment on the 10th but no Medicare was deducted. So, yesterday Len and I went to the nearest SS office about 45 miles away up in Lufkin TX.

A real nice lady assisted me. She saw where three payments were deducted totaling over $288 but only $84 was reimbursed. She found the form online that I had filled out at the NJ office in December asking that coverage be stopped. Apparently they consider December to be when I made the request. So they would not refund the October and November payments.

I had a copy of the letter I sent when I returned the card and the name of the person I talked to in September. She wrote a letter explaining all this and will send it to Medicare but she does not believe that I will get any money returned. She said there are lots of issues with this type problem with Medicare. She also said they make mistakes and leave it to Social Security personnel to handle. She also told me my March and April payments will come out of my April deposit.

Speaking of the Government - many people here at the Escapees Park are like us, fulltime RVers. We use their mail forwarding service as our legal address. The management of the park has been working on having Census forms for each person they represent. Up until yesterday they were told this was going to occur so everyone on their mail forwarding service would be counted. They now are told that someone from the census will be here one day next week but they are only permitted to bring 10 forms at a time. When those forms run out they must wait for more to be delivered. Does this make sense to anyone??? Mail forwarding customers would have to be here in Texas to be part of the census and then hope they were one of the few to be provided with a form.

Two more examples of Government inefficiency. And these are the people who want to be in charge of every one's health care? Yes, the system needs changing. But, in my opinion, having the Government run the program is not the answer.