I've been reading lately about mishaps folks are having while RVing.  Donna K recently blogged about having issues with their car.  Nick R talked about their washing machine having a leak.  There are lots of others no doubt.

We, like a lot of people, thought we would be leaving "house" issues behind once we hit the road.  WRONG!   Our house is being pulled down the road at 65 mph.  Of course there are still issues.

In May 2010 Len tangled with a diesel pump barrier and lost.  The result: 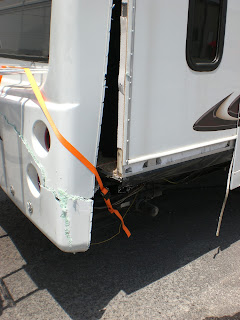 In September 2011 we blew a tire resulting in: 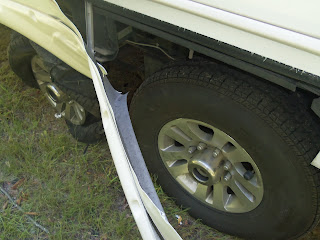 About two hours later that tire that looks okay in the above picture, also blew out.   At that point frustration set in.   We talked about hanging up the keys.   But once we calmed down, got  two new tires and had a couple of good nights sleep, sensible heads prevailed.    We are still on the road.

After the first incident, someone told us,  "There are two kinds of RVers.  Those who have had an accident and those who have not had one yet."     So, we must be ahead of the game.

Sure, we've had more aggravations.   Our original tow truck was a 2006 F250 that gave us lots of problems with the heater coil splitting.   Last March we moved up to a F350 dually.   We love the new truck but the ride is ROUGH.     First the light cover over the TV fell out of the ceiling.   Then the glass lid of our old, old crockpot broke.    But the strangest was that every piece of clothing but 5, fell to the floor in the closet when the hangers jumped off the rod.

We've since changed our fifthwheel hitch to an air ride model.  It's helped some.    But still a rougher ride than we would like.

I suppose we can all agree, the problems will come.  I t is how we handle them that counts.   But this is still a great way to live.

What do you think?
Posted by Phyllis at 6:46 PM

Well, you know we have had our issues, too, and there were times we talked about packing it in. Like you guys, though, we stuck with it. I think it's been worth it! Ours is not an escape from the real world; perhaps our world is just a bit more compact and flies down the road at 65 MPH! :) So glad you guys are still on the road after the tire incident. Wouldn't be the same without you.

And we're so glad you didn't pack it in. What doesn't kill us makes us stronger! :)

Yep, we are glad you hung in there!! There will be problems no matter what lifestyle you life.

Yep, we are glad you hung in there!! There will be problems no matter what lifestyle you life.

All those material things can be fixed up. The great news is that neither of you were hurt in those mishaps.

I think it takes quite a bit of patience and you both seem to do well. So for you it is working out.
Happy Trails always.

Glad you stuck it out and are still in the game.

Our ride in the Dodge 3500 dually is a rough ride. We are looking at a Trailaire Kingpin to smooth out the ride. While that may not give us the ride of a Lincoln Towncar. It would certainly soften the jarring that can damage a welded frame.

Since we are now static here in Arizona we envy the fact you are still on the road.What suspension does your Montana have?Our Cedar Creek had the Trail-Air and we very seldom had anything fall or move around unless we were "offroading".