Dear blogging friend Betty has been blogging about a month of April challenge to blog each day on another alphabet letter starting today with "A".   I accept that challenge.     But first...

Yesterday we decided since the coughing was continuing to go to an urgent care center here in Georgetown.    They, as I do, believe I am suffering from allergies.  They prescribed Clartin and a cough syrup they said might make me drowsy as it contains codeine.   BRING IT ON!  I needed the sleep.   They also prescribed an inhaler which I've yet to use.  Bottom line - the Clartin appears to be the answer and last night I slept well for the first time in ages.    Feeling much better today.


Now for my letter "A".     AMY
Amy and Charlotte on Charlotte's first birthday and Christening in July 2007: 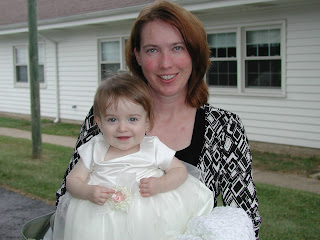 Amy is my older daughter.    She is named after my grandmother on my mother's side. I always tell her she needs to be thankful I named her after this grandmother as the other one was BEULAH.

Since Amy was still a young child she knew what she wanted to do as a grown up.  She's always had an interest in nature, animals and history.   She is an archaeologist.  In fact, she met her husband, Scott, also an archaeologist while working in Delaware.

Amy, Scott and the girls this past Christmas at their home in Maryland: 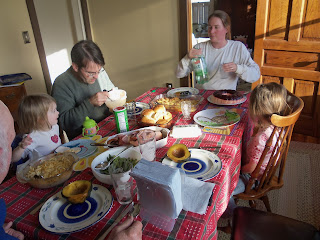 When thinking about college, Amy researched her options and selected, among others, The University of Denver.    Being a single mother and not making a lot of money, I worried how much I could help.  Amy was never concerned.   She's always been one to take the plunge without fear.   When accepted she was given work study assistance plus grants and was eligible for student loans.    It all worked out as she knew it would.    She took on the challenge, worked hard during and after college and managed to pay off her 10 year loans in 6 years.

Amy has always been on the frugal side.    I admire how 24 years after college graduation she still seeks the bargains and is not concerned having the latest popular "stuff".    She prefers a simpler lifestyle.

She finds joy in taking her girls on adventures.   Favorites are local parks and nature centers nearby in northern Maryland.   She wants so much for them to experience and learn.     Perhaps this comes from having the girls at a more mature age as  she became a mother of Charlotte just two days after turning 40 and was a month shy of 43 when she had Abby.

Amy and Abby on a hike last summer. 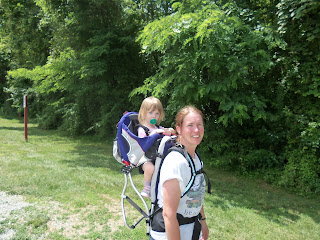 My daughter is a hard worker.  Both in her chosen profession and the care of her daughters.    It is a treat to have a meal at her home.  She always has something new and interesting, using various grains and other food she never ate while a child.

She and Scott have exposed the girls to many ethic restaurants.    She has taken me to Indian and Vietnamese restaurants, the only time I've been to either.


So today  this blog is about AMY,  a hard worker and dedicated mother and wife.   An easy choice for the letter "A".   I am proud!
Posted by Phyllis at 10:30 AM

And you should be proud she sounds like a great mom.

What a wonderful tribute to your daughter. She sounds like a very special person and you have good reason to be proud. I enjoyed your essay.

Nice post, but I'm thinking if you named her Beulah, you could have written about her tomorrow. :)

What a great way to appreciate your daughter, loved it thanks. Angela

I'm pretty sure it's allergies making you miserable. They are the biggest downside of life in Austin TX! The inhaler will probably help, but takes a while to kick in as it's more "preventative" than treatment.

And proud you should be and have the right to be. What a great post.
And you sure did a wonderful job as a mother.

What a wonderful mini bio on Amy. And what a great hands on mom. no planting her kids in front of a tv or video game to teach them. She is teaching them through seeing, touching, hearing.
Kudos to her and of course you, you raised her.